Red Letter Revolution: What If Jesus Really Meant What He Said?

Shane Claiborne,Stu Gray,Tony Campolo,Henry O. Arnold,Thomas Nelson Oct 19, 2021 Shane Claiborne,Stu Gray,Tony Campolo,Henry O. Arnold,Thomas Nelson
Best-selling authors Shane Claiborne and Tony Campolo talk candidly about the life and teaching of Jesus and the wisdom he offers our fractured world. It is time to re-imagine the world and the way we live - the old patterns of politics, economics, and religion that aren’t working. It’s time for a new kind of Christianity. In Red Letter Revolution, best-selling authors Shane Claiborne and Tony Campolo take on the hardest issues facing our world. They show that Jesus’ example is relevant and revolutionary and call us back to a Christianity that looks like him again. In this ambitious project, they mine the words of Jesus - the “red letters” of Scripture - asking the simple question, “What if we lived out the stuff he said?” From the power in Washington to the poverty in rural towns to the broken systems everywhere else, the world is looking for salvation. But this salvation is not just for peoples' souls - it’s for schools, governments, churches, and families. Red Letter Revolution is about politics, but it’s fresh. It’s about theology, but it’s real. It’s about economics, but it’s interesting. It’s about Jesus, who longs to transform the world despite the embarrassing things his followers have done in his name. For conservatives and progressives, skeptics and believers, Red Letter Revolution undertakes the world-shaping mission to understand how Jesus’ words could change everything - if we’d only give them a chance. 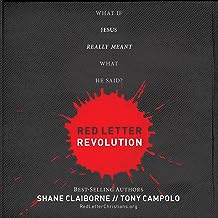 Book Title: Red Letter Revolution: What If Jesus Really Meant What He Said?